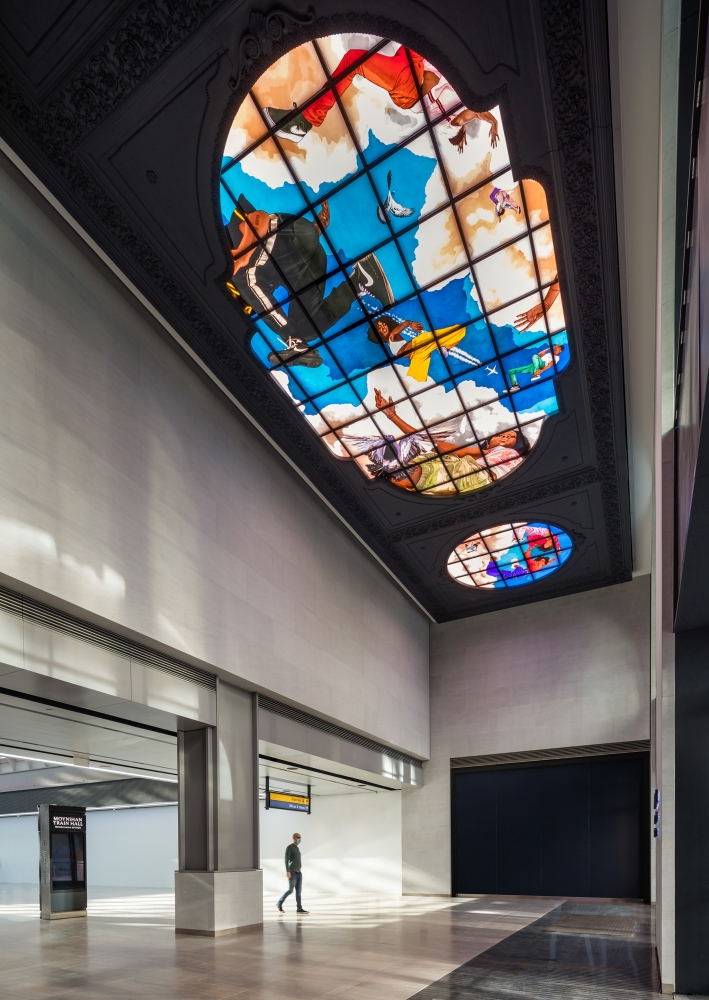 On December 30, 2020, Governor Andrew M. Cuomo announced the opening of the new Moynihan Train Hall, along with Kehinde Wiley's site-specific art installation. As part of the Governor’s visionary transformation of the nation’s busiest transportation hub, the artwork was commissioned through a partnership between Empire State Development (New York State’s economic development agency) and Public Art Fund (the leading non-profit that commissions and presents art in public spaces).

Commanding the expansive ceiling of the 33rd Street Midblock Entrance Hall, Kehinde Wiley’s hand-painted glass triptych celebrates the vibrancy and virtuosity of bodies in motion at monumental scale. Go is an exuberant depiction of young, Black New Yorkers in poses drawn from breakdance, the modern dance style, which originated on the streets of New York during the 1960s and 70s among African American and Latino youth. Wiley draws on the classical European tradition of frescoed ceilings, using a pronounced foreshortening technique (often associated with 18th century master Giovanni Battista Tiepolo) to create the impression of figures ascending to the heavens above. He captures them mid-gesture, against billowing clouds in a brilliant blue sky, lunging and twisting in poses that embody the combination of precision, athleticism, and expression inherent to this acrobatic style of performance. Wiley casts his subjects in roles traditionally reserved for saints and angels, depicting them instead as unique individuals attired in their regular streetwear. These contemporary avatars of the sublime are awesome in their gravity-defying abilities, yet familiar to any subway rider; an image of joy at the intersection of the epic and the intimate. Go extends the metaphorical language of light and divinity to reveal the talent, beauty, and power of Black bodies. Translating the urban environment into a celestial dreamscape, Wiley communicates an optimistic spirit of buoyancy, possibility, and survival.

Over the last two decades, Kehinde Wiley has gained recognition for his highly naturalistic paintings of Black and Brown people in poses and formats drawn from the Western art historical canon. He has often invited young people he encounters in urban centers around the world to embody a pose of their choosing from the portraits of European old masters, underscoring complicated and enduring socio-political histories that have determined the exclusion of people of color from much of art history. In recent years, Wiley has expanded his practice to the genres of statuary and public monument as well as the medium of stained glass. The three-part, backlit work responds astutely to its architectural context, echoing Moynihan Train Hall’s skylights and incorporating details of the ornamental ironwork from the building’s façade into the elaborate molding that frames the composition. Go is his first permanent, site-specific installation in glass. 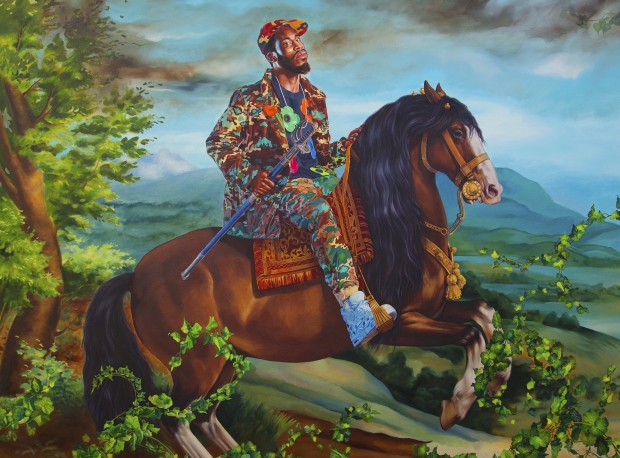