Roberts Projects is pleased to announce the LIGHT and the DARK, Brenna Youngblood’s inaugural exhibition at the gallery. the LIGHT and the DARK takes as its genesis Youngblood’s experience navigating the difficulties of last year and applying her lived experiences – endured as two separate but simultaneous realities – to her practice. From a deadly pandemic to a global movement for equitable racial justice, 2020 was defined by its world-shifting events.

The works on view hold space for light and dark, and the material representation of both by taking into account their own considerations and possibly different ideas surrounding each, but as a whole the show is committed to Youngblood’s highly personal response to her particular memories and experiences addressing the events and issues we have seen unfold so far. the LIGHT and the DARK brings together sixteen energy-filled mixed-media collages on canvas and board.

In INCARCERATION (2020), Youngblood employs traditional light-versus-darkness imagery to contrast a collaged sweater’s black and white stripes with the canvas’ otherwise smoothly painted surface. The artist’s phenomenological interrogation of abstract concepts without immediate reference to the human body hints at the larger story of the erasure and animus that has always been there for Black Americans. One of the most damning features of the U.S. criminal justice system, and the country as a whole, is its vast racial inequity. Though, immaterial abstractions seem appealing when the material world is devoid of benevolence.

Youngblood’s embrace of unconventional materials from everyday life handily blurs the distinction between painting and sculpture. New assembled collage works incorporating hundreds of craft buttons allow her to create a topographical surface to then build up and paint on with a variety of techniques: thick impastos, transparent washes, loose and smooth brushstrokes. The result is a playful intermingling of shapes and patterns, texture, and sensibility.

Though often classified as an assemblage artist among the ranks of Noah Purifoy, George Herms, John Outterbridge and Betye Saar, Youngblood’s practice defies one specific categorization. Her ability to strip the art-historical canon of assemblage of any ambiguity further bolsters her dedicated practice of collecting society’s discarded fragments to spin them into highly charged cultural critique.

Born in Riverside, California in 1979, Brenna Youngblood currently lives and works in Los Angeles. She received her BFA from California State University, Long Beach in 2002 and her MFA from the University of California, Los Angeles in 2006 where she studied with artists John Baldessari, Catherine Opie and James Welling. She has exhibited widely and her work has been included in museum exhibitions including Made in L.A., the Los Angeles Biennial organized by the Hammer Museum and LA><Art, and Fore at the Studio Museum in Harlem, NY (2012); the Los Angeles County Museum of Art, Los Angeles, CA (2013 and 2016-2017); the Contemporary Arts Museum Houston, Houston, TX (2014); Spelman College Museum of Fine Art, Atlanta, GA; Art + Practice, Los Angeles, CA (2016); Massachusetts Museum of Contemporary Art, North Adams, MA and the Kemper Museum of Contemporary Art, Kansas City, MO (2017). Solo institutional exhibitions include Riverside Art Museum, Riverside, CA (2020), Seattle Art Museum, Seattle, WA (2015), Pomona College Museum of Art, Pomona, CA (2015), the Contemporary Art Museum, St. Louis, MO (2014), and the Hammer Museum, Los Angeles, CA (2006). In 2016, she was the recipient of the Seattle Art Museum’s Gwendolyn Knight and Jacob Lawrence Prize.

A catalogue will be published by Roberts Projects in conjunction with the exhibition. 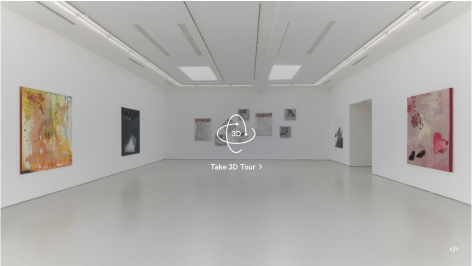 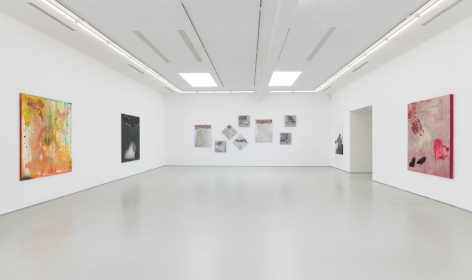 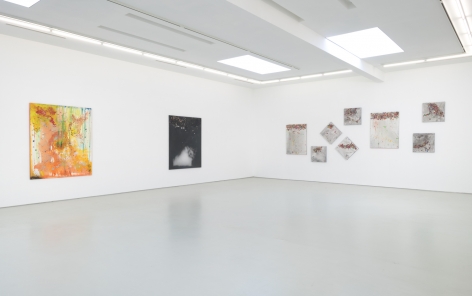 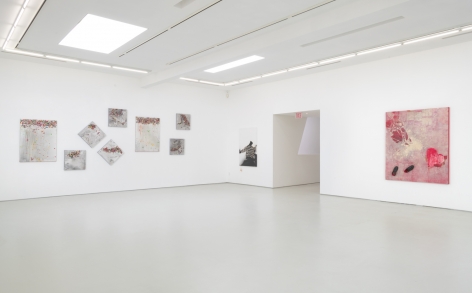 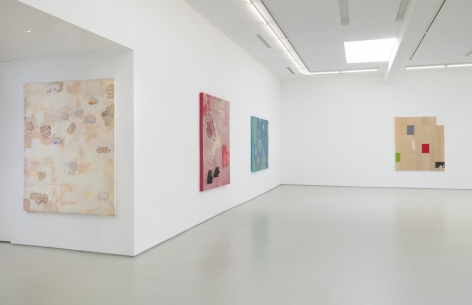 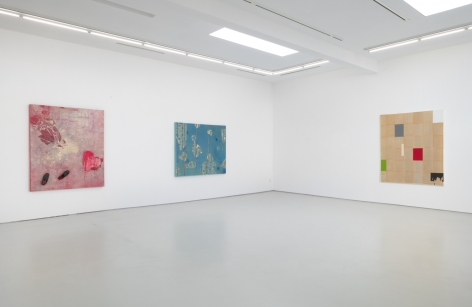 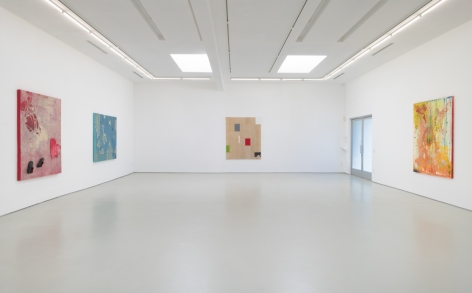 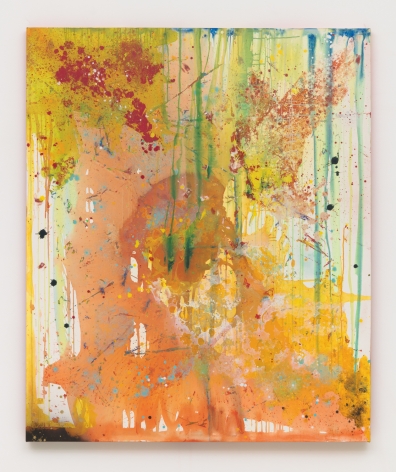 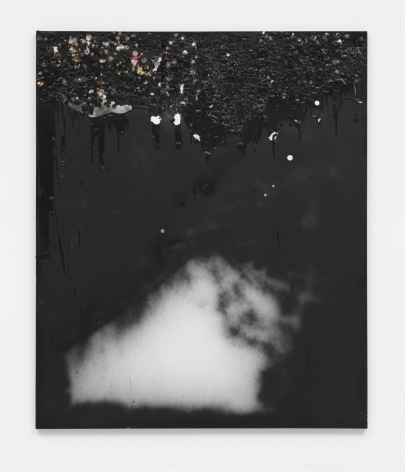 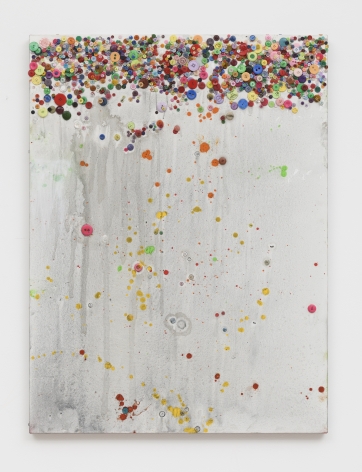 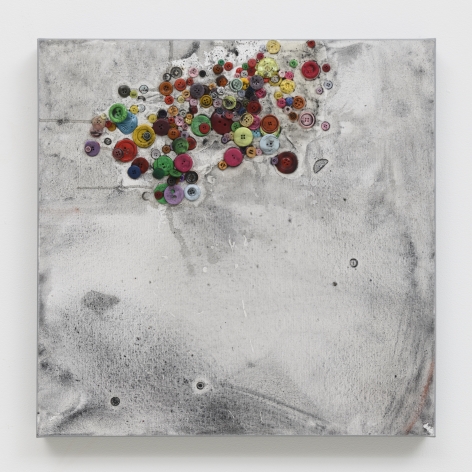 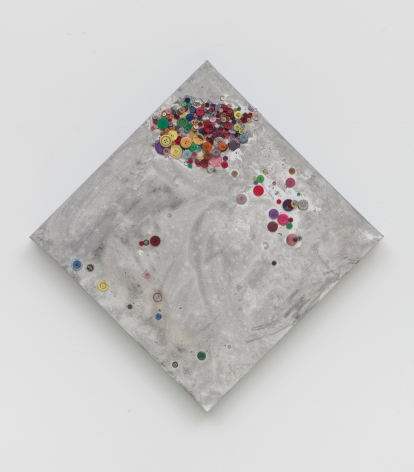 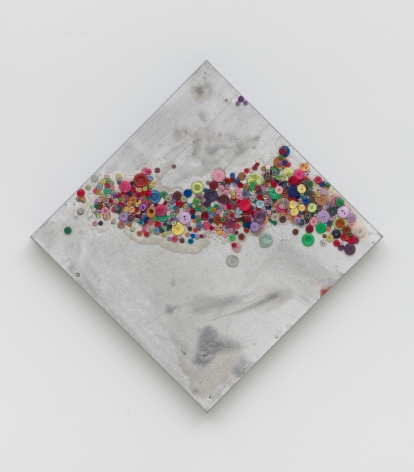 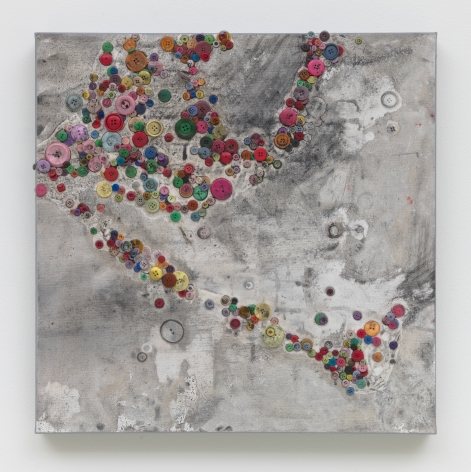 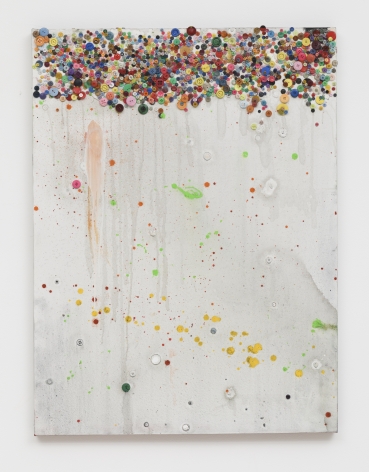 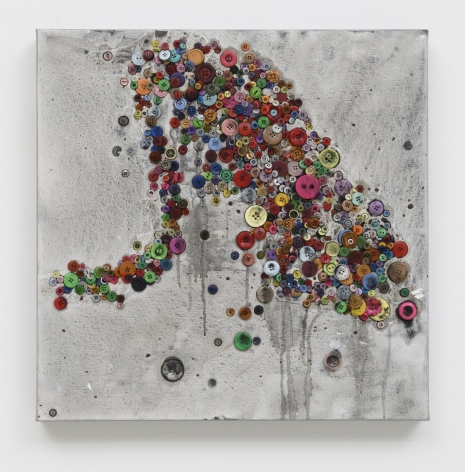 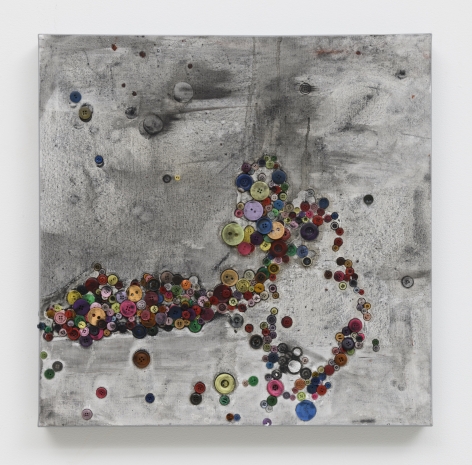 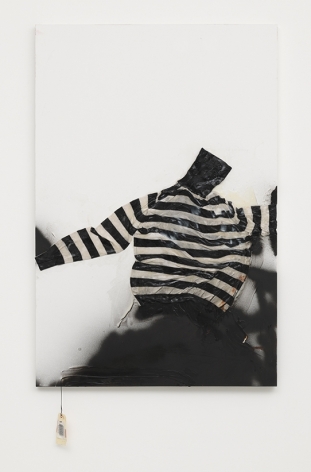 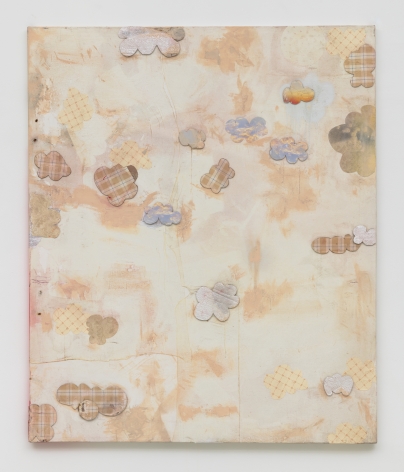 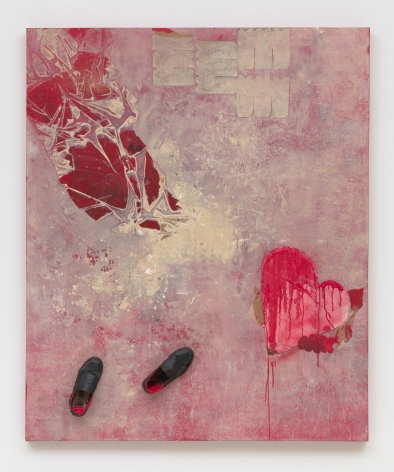 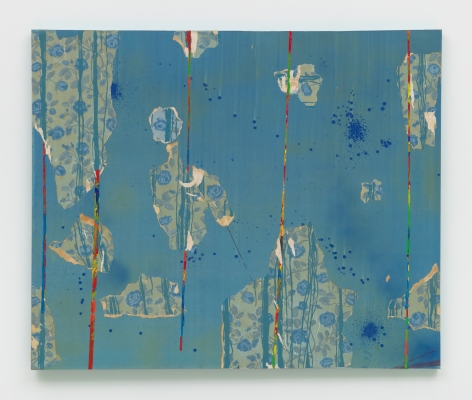 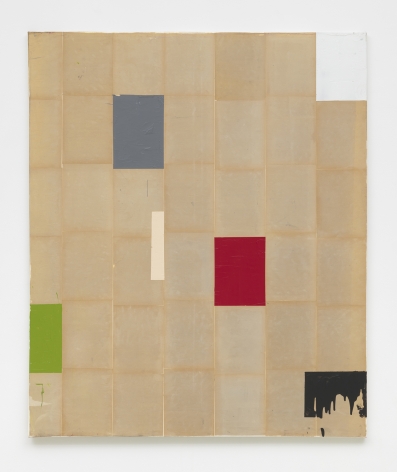 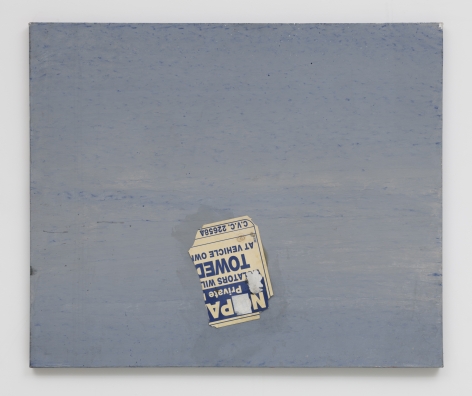 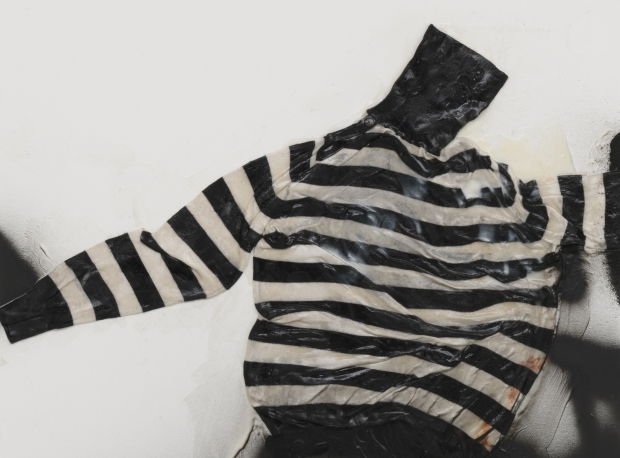 A black and white sweater, a hoarder’s worth of buttons, slip-on shoes, a brittle “No Parking” sign. These found materials interrupt the abstracted surfaces of Brenna Youngblood’s paintings in ways that would probably make Piet Mondrian yelp. Mondrian believed abstraction could only tap into the universal harmonies of life if it shunned the crudeness of reality in favor of simplified forms. His view, utopic and myopic at the same time, left its mark on 20th-century styles and movements, from Color Field painting to Minimalism.

the LIGHT and the DARK takes as its genesis Youngblood’s experience navigating the difficulties of last year and applying her lived experiences – endured as two separate but simultaneous realities – to her practice.

View at artforum.com
Artillery Magazine
Brenna Youngblood, “The LIGHT and the DARK” March 31, 2021

How we balance our individual experiences within the larger scope of our lives in many ways determines who we are, and how we understand and relate to the world around us. Reflecting on the dense and often traumatic events of the past year, which included a global pandemic and a re-awakening to racial injustice, Brenna Youngblood, in her inaugural exhibition at Roberts Projects, mediates her personal associations to these very public events as all of the works in the exhibition comprise a space for both reflection and determined response.

Currently on view in Los Angeles: five galleries are presenting solo exhibitions of highly regarded African American artists working in a variety of mediums and styles, including portraiture, abstraction, and sculpture. The presentations include the first West Coast exhibition of Amy Sherald, Stanley Whitney’s first full-scale exhibition in Los Angeles, and Brenna Youngblood’s first solo show with Roberts Projects since joining the gallery earlier this year.

Brenna Youngblood mines historical movements like assemblage and Color Field painting, fusing it with her lived experience that lends her abstractions a deeply personal quality. Her first exhibition at Culver City’s Roberts Projects, the LIGHT and the DARK, is informed by her experience of two of the most seismic events of the last year: the global pandemic and the struggle for racial equity and equality. Incorporating everyday objects like buttons or a sweater, with a range of painterly effects, Youngblood’s works straddle the line between painting and sculpture, universal and specific.